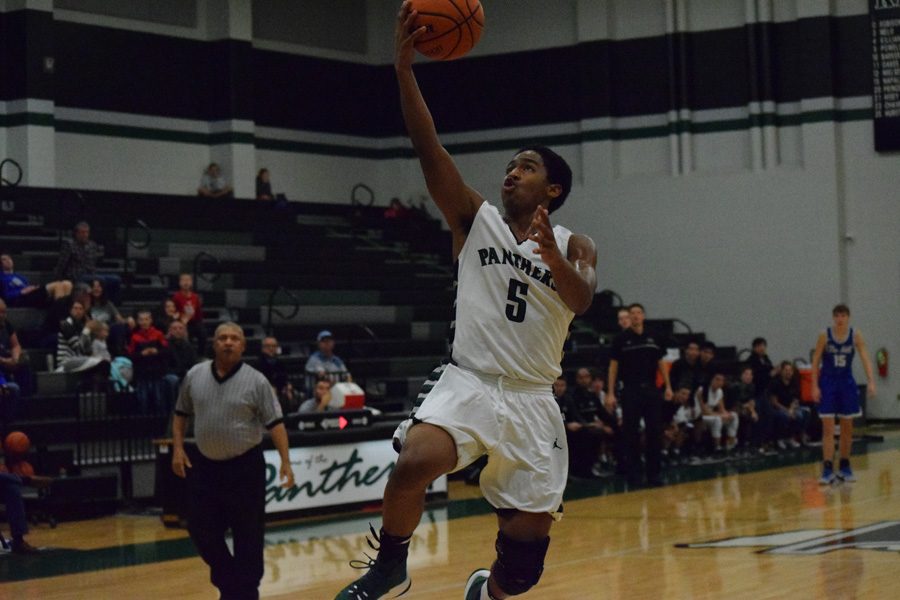 Senior Ethan Powell goes up for a fast break layup against Barbers Hill.

After a successful season last year, in which Kingwood Park’s boys basketball team made the playoffs, students and fans alike wonder if the Panthers can keep their streak of success afloat.

This will be no simple feat, however, as several key players graduated at the end of last school year, including Joe Byrd, Trent Saunders and Zach Purcell. The team’s biggest challenge will be finding chemistry at the varsity level with new players.

This year’s team is led by a fresh coaching staff, including new head coach Jeffrey Hamilton and assistant David Feliciano.

With an almost entirely different roster, and a new system under the new coaches, there seems to be more questions than answers about the upcoming season.

Last year, Kingwood Park finished with a playoff qualifying record, including a thrilling 53-52 victory over Humble in overtime, with a 10-point rally in the final minutes. The game clinched a playoff spot for the team.

In the playoffs, the Panthers won their first game in a tight race against Nederland, 44-41, followed by a loss versus Angleton, 54-40.

Jaylon Robison, a junior point guard and new member of the varsity team has high hopes for the upcoming season.

Robison has set some high personal goals for the season, including some connected

3-pointers and a good assist-to-turnover ratio.

“Obviously we’re very young,” Robison said. “We’re a lot smaller than last year, and we’ve lost some seniors. But we also have a lot of returning players. I feel like if we can come together, we can do some big things this year.”

So far this season, the Panthers have started strong with a winning record. After their recent tournament, they sit at 6-3 overall. They’ve defeated Hargrave, Cedar Creek, Eastside Memorial La Grange, and San Marcos.

Most recently, on December 6th, the Panthers took down Barbers Hill in a nail-biter, 41-40. Despite an injury early in the game, Ethan Powell was a vital part of the Panther offense. He knocked down a 3-pointer in the game’s final minute to give the team the lead.