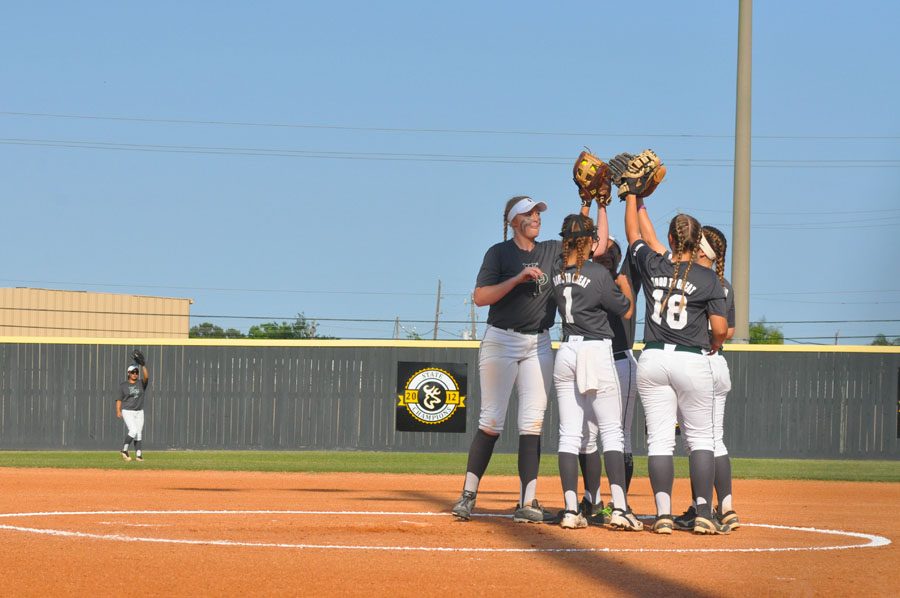 After Kendall Searcy called a timeout in a game in the second round of playoffs last season, the whole infield gathered together to encourage each other and plan their next play to gain more runs.

Kingwood Park softball is like a family, so it was tough when  seven players graduated last year and left a gap in the close-knit squad.

But the remaining players say they are  focusing on the path ahead and on the upcoming playoffs.

K-Park  softball made history last season by playing in the third round of play-offs. While they did not come out with a win, losing to Angleton 3-4, they left the field knowing they played their hearts out.

With a final record of 23-11, the Lady Panthers had a great season, but are looking towards an even better 2017. This season, softball is looking to make history again, by pushing the game even farther and making it to the fourth round and hopefully beyond. “We have a lot of natural talent,” said junior Gretchen Mead “We’re working on a lot of the mental part of the game, not just skill, because we’re all at a good level skill-wise.”

The team last season was aided in their ability to play together as a team and come together to make history. That feeling of closeness has not left K-Park softball.

“We are always together and we have all known each other for such a long time that it’s easy to transfer those feelings onto the field,” junior MacKenzie Purcell said.

The team is focusing on areas that needed to be worked on specifically for each person. If one player does not have a solid throwing form, they would work on that. If their batting skills are not up to par, they focus on hitting.

“The girls in the program are what made last season so special,” said head softball coach Sara Koym, who also teaches AVID and aerobics. “There are lots of new faces in the varsity dugout this year, but we are expecting great things from the newbies and the returners.”

In the upcoming season, many of the players,are looking forward to district games like Barbers Hill. But they all have their sights set on is the state tournament in the spring.

Last year, Kingwood Park Softball made history and they are hoping to do it again this year.

“I am looking forward to watching this group compete on the field,” Koym said. “They are such hard workers and I can’t wait to see it all pay off in play-off games.”