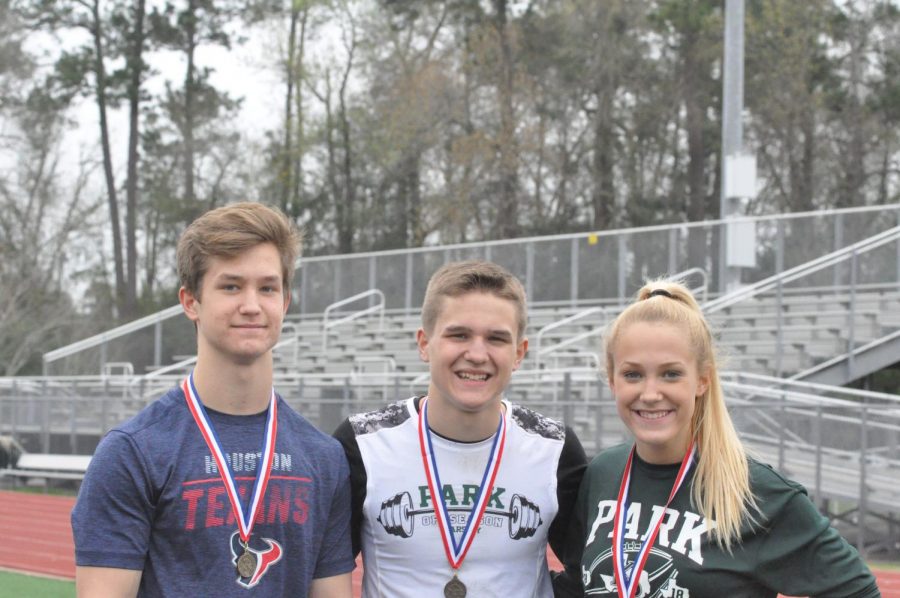 John, Grant and Victoria Golden compete in track and have already won a few medals. The three are extremely competitive in everything from sports to academics. They all have high hopes for track season.

If there’s one thing the Golden siblings can’t agree on, it’s who would win in a race. They all know that John, a junior and the oldest of the three at Kingwood Park, would come in first, but the potential 2nd and 3rd places cause quite a disagreement between sophomore Victoria and freshman Grant.

“A lot of people say my sister is the fastest one, but that’s not true,” John said. “I’ve got a decent lead on her, but she’s getting faster. Grant or Victoria? Oh my God, that would be so close. If I had to bet money, I’d probably say Victoria. She trains more and harder than Grant does, but I definitely think there should be a race. It has to happen.”

Despite their differing views, the Golden trio is extremely close not only with each other but with their older brother, Andrew, who is a freshman at San Jacinto College. The four have a dynamic and loving relationship.

“It’s crazy, we love each other; but we also fight a lot,” Victoria said. “That’s just because they’re boys and they’re crazy, but I love them all and we support each other all the time.”

All three of the Goldens are in track, and all three run the 100 relay, the 200 relay, and open 100. Grant also throws shot put and discus, Victoria does long and triple jump, and all three will occasionally run the open 200. For Grant and John, however, track is just a way to get faster for football. For Victoria, it’s much more.

When she was in 6th grade, her social studies teacher, who also happened to coach track, saw Victoria run at field day. The coach immediately asked Victoria to join track.

“She thought I was fast,” Victoria said. “She convinced me to do it, and I’ve loved it ever since. It’s something I believe I can do in college, so I train out of school, and I really work hard for it, I try as much as I can.”

Victoria is a Silver Star; and, as much as she loves dance, track is her passion. For the boys, their passion is evident – football. Grant and John provide each other with constant motivation to keep getting better.

“We are always competing, me and him,” Grant said. “I do everything I can to get stronger. John squatted 285? Ok, I gotta do more than that. I’ll do 295. John power cleaned 215, I didn’t get that this time, I did 205. Him being stronger than me kinda pushes me to be better, because I don’t care about beating freshmen, I care about beating my older brother. It’s kind of a huge deal to me.”

The siblings are constantly there for each other, whether it be providing advice or hyping each other up before a meet.

“We are [each other’s] biggest supporters there,” Victoria said. “We are screaming, we tell them to run as fast as they can. I’ve always tried to help them, too. I bring them Biofreeze if they are in pain, have a roller for them to use when they are sore. I always try to just give them advice if they need it and keep them calm before their race.”

No matter how close the siblings may be, Victoria is the one that both John and Grant feel that they can always talk to because she’s more agreeable and less stubborn than her brothers.

“Me and my brothers, it’s kinda like we’re competing for the manlihood in the family, trying to be the most dominant, and I don’t have to do that with my sister,” Grant said. “Victoria is the one that keeps us calm, she keeps us in check.”

The Goldens value spending time with each other above all else. When they were younger, they fought all the time, but with increasing age comes increasing maturity. According to Grant, Andrew is the parental figure when their parents aren’t around, Victoria is the one that keeps everyone in line, and John is just a normal high school guy.

“My role… I’ll just say I’m the rule-breaker,” Grant said. “I’m the one who doesn’t follow the rules and tries to do what I want.”

Throughout competing for grades and sports, one thing is guaranteed to bring the Golden trio together – their faith.

“I know (my faith) helps me,” Victoria said. “Before I race, you’ll see me on the side with my hands on my face because I’m always praying before I race or dance or anything. We go to church as much as we can, every Sunday. It helps me daily, helps me stay calm, helps me get through my day.”

Just as the siblings rely on God to protect them, they rely on one another as well. The boys are especially protective of Victoria, occasionally controlling her romantic life because they don’t like seeing her hurt or sad.

“I’m really overprotective of my sister,” Grant said. “If we don’t like him, she’s not dating him. If he’s a piece of crap guy, he doesn’t deserve her. The way he acts around his friends and the way he acts around his girlfriend are going to be totally different. I wanna know the real side of him because it will eventually come out and make her sad.”

Though the siblings excel at their respective sports, they remain insecure and have their own personal struggles.

“My biggest struggle could probably be working on myself, and being nicer to some people,” Grant said. “They gave us the number of students that kill themselves every year, and I went, ‘Well, I’m kinda mean to some people, and I don’t want to be that person that causes somebody to be one of those numbers.’ It’s kind of just a mental thing I have to work on, not to be so mean to some people.

“People say that when they see me in the hallway, they think of me as a mean guy, they don’t want to talk to me. If you get to know me, I can be nice, I’m not a jerk all the time. Just because you see me and I’ve got a stern face, if you actually talk to me and get to know me, I’m a really nice person. I think it’s the same for my brother. We both have that kinda face. He does [smile more]. I don’t even smile, I have a bad smile, so I don’t do it.”

Because the siblings are so close, the idea of one of them leaving can seem like a blessing and a curse. There is no doubt that the boys will miss each other, but they can’t wait for one of them to leave because they all share a room. The boys leaving will be hard, but perhaps the hardest person to let go will be Victoria.

“Victoria’s going to be hard,” Grant said. “When she leaves, that’s going to be harder, especially on Mom, because they’re really close. When John leaves, I’m kinda going to have to find someone stronger than me, so I have someone to compete against.”

Grant looks up to his siblings not as role models, but as people that have huge, influential parts in his life. Both Victoria’s and John’s ability to focus on what needs to be done is something he is proud of.

“[Victoria] might look like just a Silver Star dancer that’s weak and a girly girl, but she’s probably stronger than half the boys in this school. I can’t even watch [her] dance sometimes, I get so nervous. I have to close my eyes because I don’t want her to screw up,” Grant said. “Watching them win, when they compete and win, it’s awesome.”