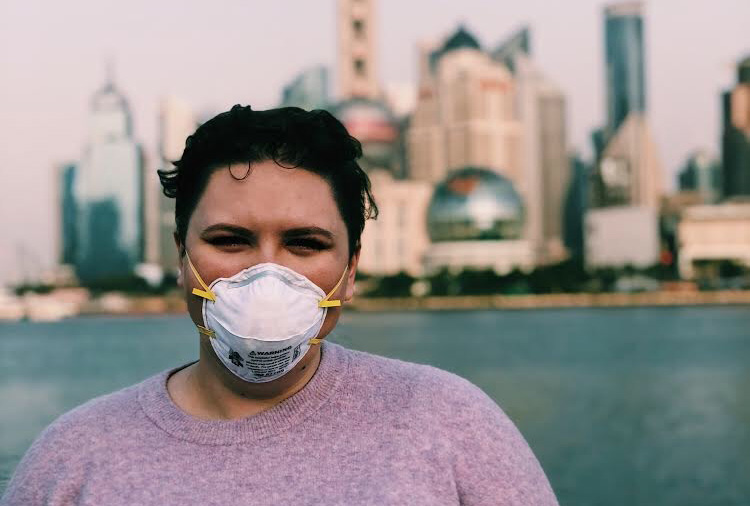 Summer Creek graduate Sarah Smithson stops by the Bund in Shanghai to take a photo. The usually crowded tourist attraction was almost empty because of the coronavirus outbreak. Smithson has spent much of the past two months in her apartment in Shanghai since the school she teaches at had to temporarily close because of COVID-19.

In November, Summer Creek alum Sarah Smithson moved to Shanghai, China, to work at Disney English. The 2015 graduate was set to spend 14 months teaching English to children in China through a Walt Disney Company program.

“While I moved to Shanghai for my job with Disney English, I was also moving partially because of the chance I would get to travel and see parts of the world that I may never get the opportunity to see again,” said Smithson, who has an international business degree from Houston Baptist University.

Her plan didn’t last long. Barely two months into her trip, the coronavirus outbreak – which began in Wuhan, China – left Smithson and many others under lockdown with strict rules to contain the outbreak.

“Things didn’t start to seem too bad until right before I left (on vacation) for Vietnam on Jan. 21,” Smithson said. “By the time we were flying back on the Jan. 27, we had to sign health waivers to get back into the country and we were required to wear masks in public. Things escalated rather quickly after that.”

Like everywhere, Shanghai has been working hard in getting the situation under control. People’s routines had to quickly change.

“People didn’t know what to think at first, but soon everyone rallied together and followed the rules set in place by the city,” Smithson said. “I wear a mask everywhere. I am not allowed on the metro train or most establishments if I do not have a mask on. When I walk into a building I have to get my temperature taken. Just in one day, I have gotten my temperature taken over five times. I don’t touch anything that I don’t have to, and I wash my hands constantly.”

Reports have shown China has more than 67,000 people infected with COVID-19. Of those cases, more than 3,100 have died. Those older than 60 or with pre-existing conditions have been the most vulnerable in China.

“This virus, while dangerous to people with low immune systems or pre-existing health issues, is not that big of a worry to the rest of us,” Smithson said. “The mortality rate is low. If you wash your hands you will be okay!” 5395″ align=”left” background=”on” border=”all” shadow=”on”]

Like many Americans, Smithson said jobs and bills have been a concern for those in China as well.

“I was supposed to return to work on Feb. 1, after our Chinese New Year holiday,” she said. “Instead, it was pushed back to the Feb. 9 and then indefinitely.”

Her program started teaching online classes on March 19. They are uncertain when their actual center will re-open for face-to-face classes with students.

In the meantime, Smithson said life in China has definitely been different than what she has seen happening in the U.S.

“Nothing has run out here,” she said. “At all times I was able to get what I needed: food, water, toilet paper, even soap. It’s interesting to see because the US panics and stocks up with more than they need, but here they continue their same shopping habits and there is plenty for everyone. Now seeing everyone freaking out about something that I have been dealing with for more than two months, I am finding the panic to be a bit unnecessary.”

Many are ready to get back to their normal daily routines. Being trapped all day in her apartment, Smithson tries to keep a normal schedule with work, watching TV shows and playing board games.

“Now that it has gone on so long, I am starting to get excited for classes resuming and things getting back to normal,” Smithson said. “I’m a teacher and I miss my students.”

Smithson said some of her family and friends in the U.S. were concerned about her staying in China, but she insisted on remaining in Shanghai.

“I believe that traveling in a plane — sharing air with people I don’t know/don’t know where they’ve been — would put me in more danger than I am here,” Smithson said. “My mom told me from the get-go that she would support whatever decision I made, and I still believe I made the right decision.”

Personally, Smithson has not been quarantined, but her friend Courtney has had to be quarantined because of her arrival to Shanghai from the U.S.

“She had to stay in her apartment for 14 days without leaving,” Smithson said. “No one was allowed to go and see her or anything. She had groceries delivered and stayed by herself. We FaceTimed almost daily to keep her sane. She just finished her quarantines and came over to watch a movie and eat pizza.”

In the past seven weeks, Smithson has been staying with her friend Laura. Through the situation, Smithson said it has brought their relationship closer. Smithson has had no family affected by the virus personally, but many of her friends have returned home to the United Kingdom and the U.S. until it settles.

“Things are slowly starting to pick up again around here, more people are out, more businesses are open, and it seems like Shanghai is starting to run smoothly once more,” Smithson said. “That being said, it will not be back to ‘normal’ for months.”

Food services (equivalent to Postmates and Uber Eats) are open still in Shanghai and to get your groceries you can either have them delivered or you can go get them yourself, as long as you follow the rules of wearing your masks and getting your temperature taken.

“I chose to go to the store because it gives me a chance to get out of the house and walk around for a bit,” Smithson said. “I am very careful with washing my hands and disinfecting when I get back to my apartment.”

Smithson still is able to talk to friends and family here in the U.S. with WeChat, a messaging app used for mostly everything in China. The hardest part is for her not being able to go do anything.

“I can’t go to Disneyland because it’s closed, and I can’t go shopping because most of the malls are just now reopening,” Smithson said. “Eating all my meals inside my apartment is getting old. But I am very lucky to be happy and healthy, so I am not complaining!”