Admin passes out devices as final nine weeks get underway 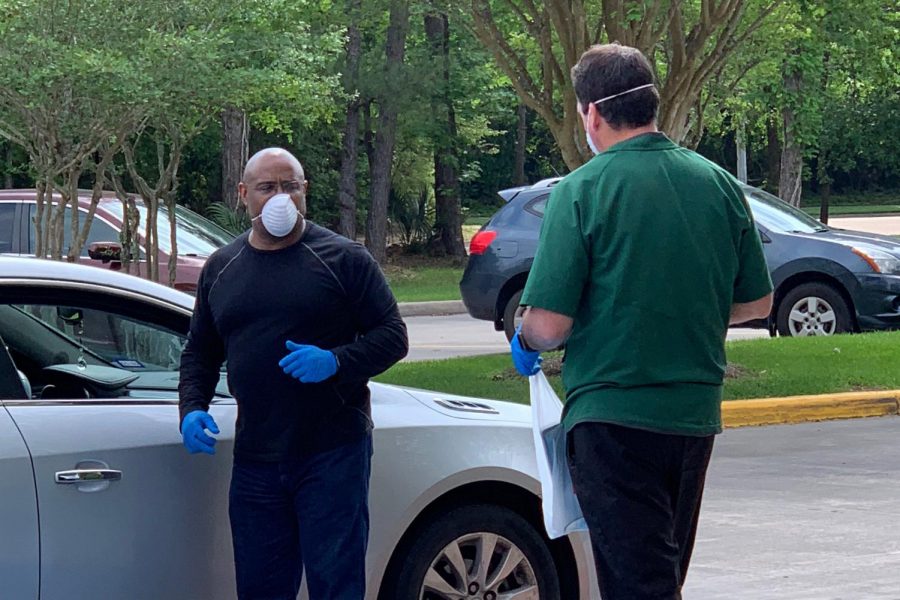 Assistant principal prepares to hand a device over to a family with the help of associate principal Wes Solomon. The principals worked together to get devices in the hands of more than 100 students who needed them.

Principal Lisa Drabing spent the past week and a half working to get electronic devices in the hands of students. Humble ISD rolled out its fourth nine-week grading plan on March 29, and since then Drabing has made sure students can participate.

“Being able to assist students that need a device, being able to put a device in their hands was a highlight,” she said.

Schools will remain closed until at least May. 4.

“They wanted to come up with a plan that was not overwhelming for students, not overwhelming for teachers, something that was very doable with all that was going on and that it would not be harmful to the students’ grades,” Drabing said. “I think they accomplished that. I think for students it’s very fair and it gives them an opportunity to improve grades. I think they truly acted in the students’ best interests.”

With the majority of the final nine weeks being executed online, surveys were sent out to all students to ensure that they had access to devices at home. Drabing said the school heard from 100 to 110 students who need a device.

“I feel really good about the high number of students that we were able to contact and engage with and just reach out, do well checks on,” Drabing said.

The hard part for her has been thinking about the students who normally look forward to and take refuge at school everyday. She hopes that those students are staying connected to the teachers and adults who normally help guide them during the school week.

“I think that the hard part is knowing that so many kids do come here for the relationships that they have with adults on this campus and we can meet the needs and care for them in ways that maybe they’re not getting anywhere else,” Drabing said. “I hope that they have stayed connected to that teacher, to that adult, whether it’s through Zoom, email, Schoology, whatever it is because we are still certainly here for them.”

Changes have had to be made, however. For hands-on classes like architecture, instructor Missi Taylor has not been able to simply transfer everything online. Her classes were one month away from completing construction of their tiny home. Now, the project is suspended until everyone is allowed to be back on campus.

“I miss [my students] terribly,” Taylor said. “I have taught most of them since they were all freshmen. They have told me that they are using their skills they have learned at home helping their parents with house projects.”

While classes continue online, many events have been canceled or are still in limbo.

No official announcements have been made regarding spring events planned for seniors, including senior picnic, prom and graduation. Concern that they will be canceled or postponed is at the forefront of many seniors’ minds.

“My heart goes out to them,” Drabing said. “To go through four years and then not be able to maybe celebrate traditionally as we would, you know we’re going to find ways to celebrate our seniors and their accomplishments.”

Senior Kendall Syska said that her greatest fear during all of this is missing out on prom and graduation. The soccer player and class officer said that the thought of having played her last high school game or already having her last day is really hard for her to accept.

“There were times where I just felt like the whole world was ending,” Syska said. “It’s hard to face our reality right now.”

Although Syska said she was devastated, her teachers have helped cheer her up and made the most of the situation during Zoom calls.

“I just hope that we all have a chance to relive part of our senior year,” Syska said. “Whether it’s prom, senior picnic or graduation… we deserve to have some of it back.”

Drabing hopes for the same.

“This is temporary,” Drabing said. “While we can’t be face to face, we’re still there for them in those other avenues. Eventually, we’ll be back together and pick them up and love on them and get them back in the school. We can’t wait to do that.”