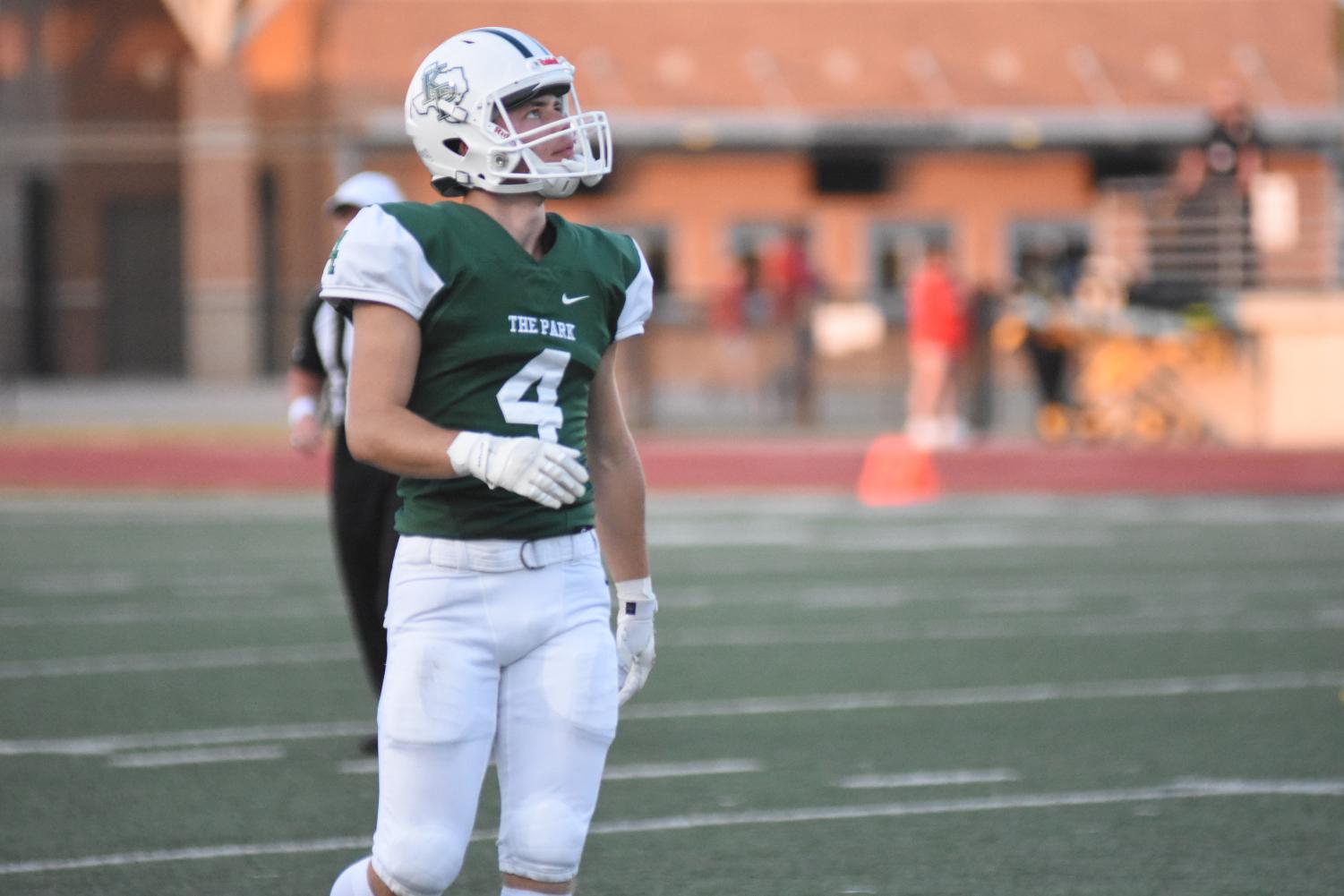 Canen Adrian has a solitary moment on the field during a lull in the game. The senior has just started his second varsity season. (Eliza Gonzalez)

Canen Adrian has a solitary moment on the field during a lull in the game. The senior has just started his second varsity season.

Senior Canen Adrian has worked nonstop for his position on the varsity football team, but he doesn’t let his popularity cloud his vision.

“I’m not just one of those ordinary football guys, I’m a pretty humble kid,” Adrian said. “ I don’t like talking about myself that much, I let my game speak for me.”

That’s exactly what the inside receiver does. He has been invited to the Army All American Combine and the Hawaiian Tiki Bowl, both prestigious games for high school students.  He inspires many people on the team, including his little brother, Graycen, who is one of the few sophomores on varsity this year.

“He never stops working, he works really hard to get to where he’s at right now,” Graycen said. “[Inspiration] For football, it’s my brother. That’s who I want to be like.”

Canen is happy to play with brother, saying that he earned it. Canen puts in the work every day, and to have his brother emulate that is an ode to his dedication.

“I didn’t find out until the third day of practice, I already had it in mind but then that’s when I officially got called up to varsity. It’s pretty cool because my first year ever playing football, he was on my team,” Graycen said. “We both play receiver.”

The Adrians moved to Kingwood from Deer Park right before Canen’s freshman year. It took him a while to adjust, but ultimately he said it was the best for him and his athletic career.

“I left all my friends, the family I had, and started basically a brand new life,” Canen said. “I had to overcome, I had to meet new people, change the way I do things, but it basically made me a better person.”

While moving to a school district where he would have more opportunity helped him, things ultimately came down on Canen, and how hard he was willing to work.

“A lot of people don’t know the background of how much [Canen] actually works out,” Graycen said. “This summer he worked out almost every day. He went to speed camp in the morning, then he would go home, then at like five or six, he would be back on the field.”

“It’s his last year of high school and we get to do it together, so that’s pretty cool. It’s going to be a thing that we can talk about for pretty much the rest of our lives.”

All of his work is pushing him towards his future. His primary goal is to get a degree in kinesiology and go into coaching.

“[Going pro] is the ultimate goal, but if I don’t, it is what it is,” Canen said. “I’ll just get my degree and go into coaching. Right now there’s a couple of schools talking to me, but wherever I get the best offer from, that’s where I’m pretty much going to go.”

It seems far away, but Canen will soon be leaving. Graycen is happy at the moment, but knows when the time comes, the happiness will give way to a more somber mood.

“Right now, I joke that I’m ready for him to leave. When the time comes, I’m probably going to be pretty bored at my house because I’m the youngest and all my brothers are gone. It would just be me,” Graycen said.

The whole family is in love with football and doesn’t see the time they spend on the field and hours at the gym as time ill-spent. The boys haven’t played together for years, and it is their last chance to.

“We are so excited that they finally get a chance to play together,” the boys’ dad, Jason Adrian, said. “They both push one other to be their absolute best, [they] want to see each other succeed.”

Throughout the grueling offseason and hours of hard work, Canen has never wanted to give up football. It is his passion.

“There’s always going to be obstacles in your life, and you have to overcome those because you can’t just quit, you have to keep moving forward, keep pushing through. If I gave up, I feel like I would just let everybody down, everyone that put forth time and effort into me,” Canen said.

The season has just begun, but both brothers are already looking forward to the memories waiting to be made.

“It’s his last year of high school and we get to do it together, so that’s pretty cool,” Graycen said. “It’s going to be a thing that we can talk about for pretty much the rest of our lives.”