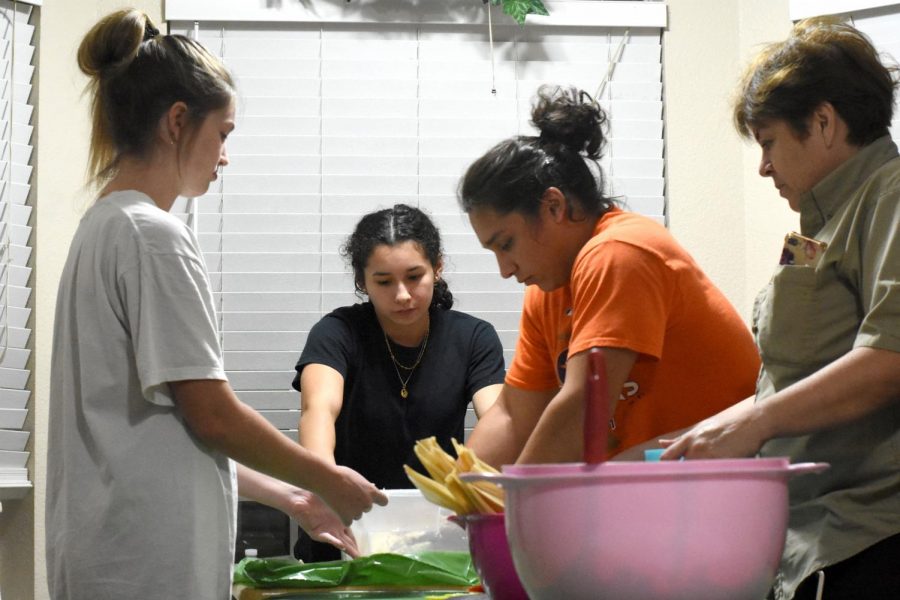 Juniors Crosslin Silcott, Anaih Ibarra and Richard Rivera help prepare the masa for a new batch of tamales on Sept. 21 while Richard’s mom Jaqueline Rivera assists. “It was 15 of us in the kitchen,” Richard said of the weekend the journalism students made 900 tamales at his house. “We don’t really see each other that much because we’re in different classrooms, but I felt like I got to know them a lot more because we’re all talking to each other while we were doing it and just talking about everything and listening to our music.”

With music blasting and high schoolers laughing, junior Richard Rivera’s house was a rare scene on Sept. 20. Throughout Elm Grove, families were recovering from Tropical Depression Imelda. But at Rivera’s house, members of the journalism program were making tamales.

Richard grew up eating tamales in Mexico for Christmas and Thanksgiving. It was a family thing. Now, after making 900 tamales with his journalism classmates to help pay for journalism conferences, they’re a part of a new family.

“I felt like I got to know them a lot more because we’re all talking to each other while we were doing it and just talking about everything and listening to our music,” Richard said. “I enjoyed that a lot because I like to think of my friends as family. So having everybody at the house I was like ‘It’s a big family environment.’”

Richard, who is on the yearbook staff, runs track and works 25 hours a week at Whataburger. He makes sure his family is his top priority. He looks out for his older sister Lesley, who is currently a sophomore at Texas State, and his younger brother Randy.

Instead of letting Lesley get in trouble for forgetting to do a chore when they were younger, Richard would tell his mom that he would clean for her. He never wanted his sister to be in trouble.

“He puts his older sister and little brother before anything else,” his mom Jaqueline Rivera said. ”They mean the world to him.”

Richard’s relationship with his mom and grandmother is what fueled his love for tamales. When Richard went home from school one day talking about a band fundraiser, his grandmother came up with an idea to sell tamales rather than participate in the regular fundraiser. He had no idea what type of reaction he would get.

“The first time it was definitely like, ‘What if they don’t even like them?’ and then I would be that guy who couldn’t make the food right and it didn’t taste good,” Richard said. “That was my biggest worry about it.”

However, his tamales did not garner bad attention. At one point when was handing some out in class, somebody reported him to security for having a “suspicious package.” When called into former assistant principal Mark Ruffin’s office, he was told that he wasn’t allowed to sell tamales.

Then Ruffin asked him to bring some down if he had some extra tamales. Ruffin was thrilled to have some tamales of his own the next day.

“At the end, he wasn’t even mad,” Richard said. “He was more happy that he actually got something.”
Richard has been working for a long time. As a third grader he spent his summer fixing up a house his family was moving out of. He also helped fix cars. Now, he works at Whataburger.

“Working is always something that I’ve been doing since a little kid, and I guess you could say that’d be a part of Hispanic culture, but like you start maturing at a very young age because of what they need you to do and I just got so used to that,” Richard said. “It’s just ingrained in my head. I feel weird whenever I don’t work for some time because it’s something I’m used to.”

Richard works 25 hours at Whataburger. Then in his free time he helps build a jacuzzi for his backyard.

“He takes his job seriously,” Richard’s manager Esthepany Samantha Torres said. “It might just be fast food, but he does care genuinely and you can see it. He helps the team in any way he can at all times.”

He’s good at what he does and brings fun to the fast food restaurant. Through his hard work and good attitude, his family at home and at Whataburger envision him doing good things in the future.

“I see him working and helping people with the career he wants to go into,” Jaqueline said. “He would be good for what he wants to do. I see him as a successful kid. He has great levels of leadership that I see him using wherever he goes.”