Students narrow down activities when stretched too thin 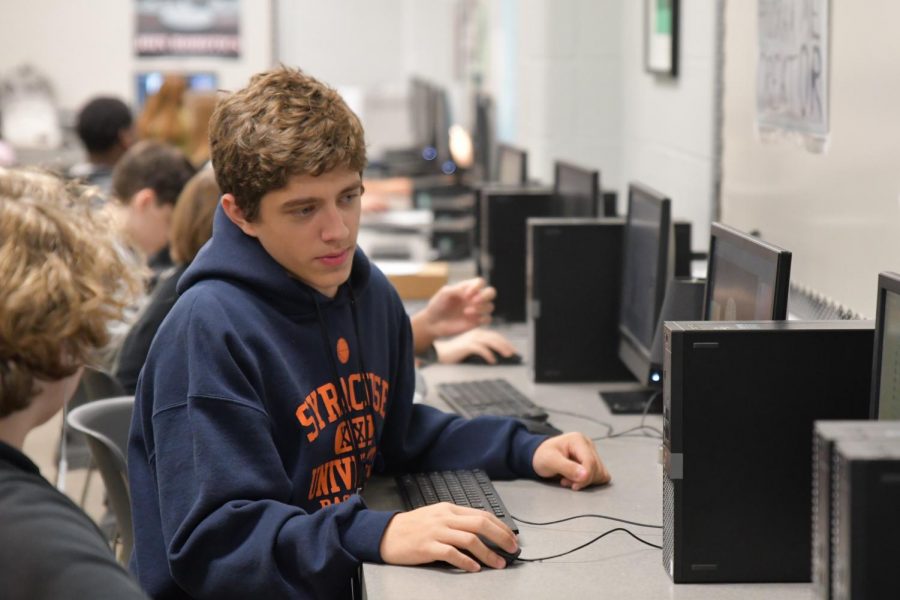 Senior Brett Fahrenholz focuses on a graphic design project in Tonya Smith’s class in October. Fahrenholz quit football to be able to focus more on wrestling.

Time management is an issue for high schoolers. Students who work and are involved in sports and activities struggle to get their school work done or find time for themselves.

“One thing I struggle with is sleep,” senior Brett Fahrenholz said. “I think that if I got more sleep then I would be more healthy and ready to go in the morning.”

Fahrenholz has been playing football since he was 8 years old, but finding time in his schedule was becoming a struggle in high school. In his senior season, he gave up football to focus on wrestling.

“Every game I wish I was on the sidelines to give the guys a minute of rest,” he said. “But afterwards I remind myself that I made the right decision. Leaving football didn’t benefit just me. Missing football helped me be able to help the younger guys in wrestling.”

Junior Lauren Park, tries to find time in her day for school, tennis, church and her job at Alspaugh’s Hardware. With all of Parks’ activities she has to give up work to do everything else she enjoys.

“I manage it all by finding gaps in the days between working in school and doing most of my work then,” Park said. “I have to give up work because I play tennis and I am a part of many school and church activities.”

For Parks, trying to choose what to eliminate has been a challenge, especially because she said her parents have encouraged her to keep working.

“They push me to have a job, but parents don’t understand that it takes up most of my time,” she said. “Especially with junior year, I have so much to do but so little time.”

Along with Fahrenholz, sophomore Dylan Lee had to give up football to focus more of his time on debate and his criminal investigation club.

“I want to be a lawyer when I grow up and football wouldn’t get me there compared to how debate would,” Lee said.

Though Lee gave up football, he misses it.

“It makes me jealous when I see them playing and it’s kind of weird not going out, but I still hang out with the players and I am still included in the football group chat,” he said.

For those trying to balance so many different activities, prioritizing the most important ones are key. Even if they quit participating in one, it doesn’t usually lead to much free time. And it doesn’t fix all their issues. No matter how many clubs they are involved in, procrastination proves to be arguably the biggest issue many of the teens struggle to conquer.

“I am a procrastinator and it doesn’t help that homework is boring,” Fahrenholz said. “I do eventually do my homework so I don’t get C’s or D’s, but I do think my time management is a problem.”

Trying to balance so much and prioritizing is something Fahrenholz said has taught him lessons.

“Something I’ve learned over the past four years is to fight through it,” he said. “There were many days (at work) I was supposed to have off, but I got called in and I groaned. I never said no, though. High school has taught me that it sometimes pays off and to just deal with the struggles in the moment.”