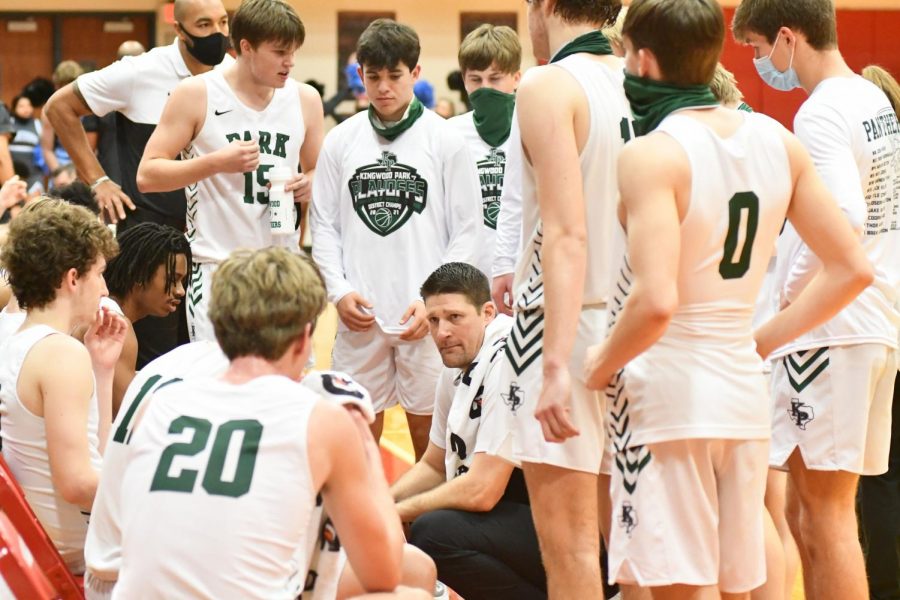 Coach Jeffrey Hamilton talks to his team in a huddle during their playoff game against Paetow on Feb. 26. Hamilton led the team to their best season in over 10 years.

Coach Jeffrey Hamilton wasn’t an easy coach to play for. He would yell at you. He would be hard on you. He would run you until you threw up sometimes. But that’s his job.

Coach Hamilton helped me in so many ways that I can’t even imagine. I remember he would always tell us that everything is earned and never given, which is one of the most truthful things I’ve ever heard.

Coach Hamilton carried himself very professionally and it showed in everything he did. If it was getting ready for a game, practice or if we were in an intense basketball game, he would always keep his cool. Hamilton didn’t know just how to be professional, but he is also a very nice person as well. When I came to visit Kingwood Park my junior year, he welcomed me with open arms. He told me that I was welcome to be a part of the Kingwood Park family and now I’m blessed to be a part of it.

Not only is Hamilton a nice person, he is a hard worker and he is very determined. He did almost everything for us. For instance, he would stay up late at night and watch film of a team and write down every player’s strength and weaknesses after having a game the same night. Not only that but Coach Hamilton would also write down every play the other team ran so he could teach us what they were trying to do to score.

Hamilton is a loving person as well. Coach would always have us doing something fun at the end of practice, and he’s always helping his own kids with sports and taking care of them like any loving dad would do. You can also always see Hamilton talking to parents, coaches, and teachers before games because he isn’t self-centered, he is a caring person.