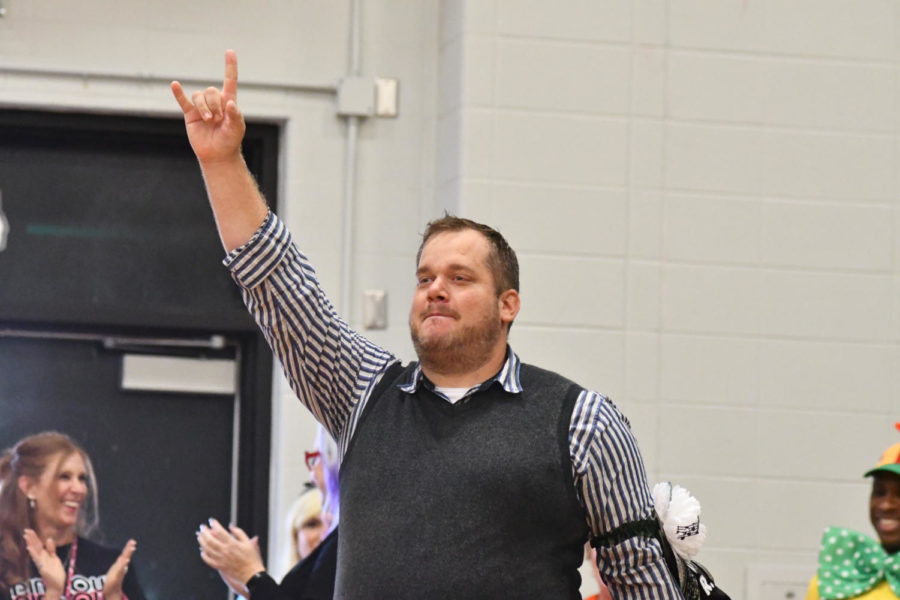 Band teacher Bryan Hess signals to his fans during the Homecoming pep rally when he was celebrated as being part of the faculty homecoming court.

If I were to describe Mr. Hess in one word, I couldn’t. There’s too much to talk about. He is smart, funny, and an overall nice guy. For example, he stands outside the band hall everyday before class to greet me.

Although he isn’t my teacher anymore, he still teaches me. At the beginning of the semester I started playing for the Wind Ensemble. I was nervous because everyone was better than me, and I was worried I would sound bad, but he told me that day that I deserved to be in that band. It really moved me, and although I still think I suck, I feel a lot better about it.

He one time complimented me on this story I wrote that ran in the paper called “Music Man.” He gets involved with things outside of the band although he doesn’t have to. He is very firm with me and the rest of the band. He gets things done, and isn’t afraid to point out things I need to work on, but also tells me things I do well. I wouldn’t ask for anything more from him.

My instruments broke a few times in my one and a half years at the school. Although I’m sure he gets upset about it, he never tells me. I’d just shoot him an email, and later that day or next I would get a response. I would bring in the french horn the next day, and he’d give me a new one. He acts very professional and polite about it although I feel like crap about it.

So I guess if I were to describe Mr. Hess in one word, I think I speak for all of the band with the word moving. He moves us forward.