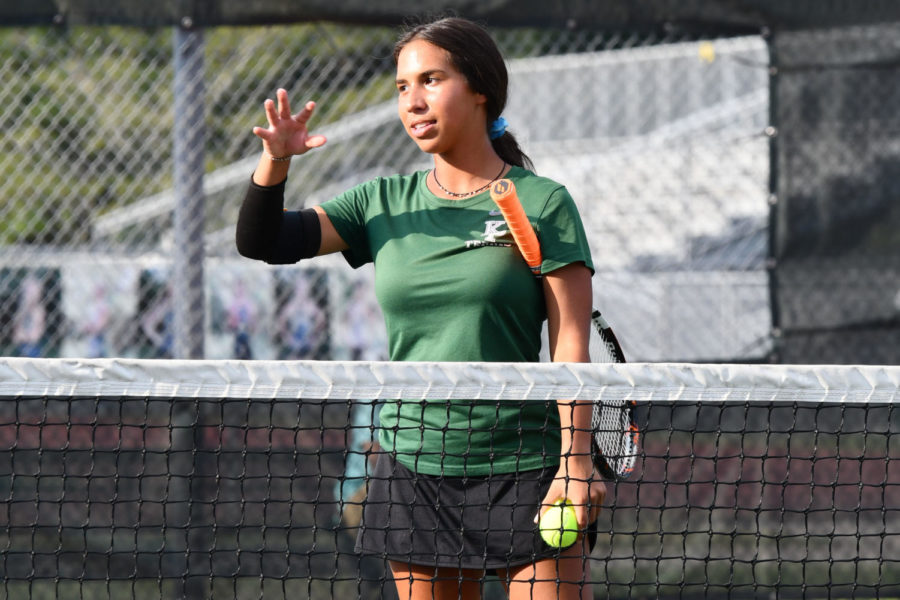 Senior Sophia Sifontes talks to a teammate before starting a match against Lake Creek on Sept. 23.

What do you like the most about being on the tennis team?

“I think, the team itself. All of us get along and have fun. Even when competing against other schools, it’s like a family.”

Do you play doubles or singles?

“For the fall season I play both singles and doubles. My doubles partner is Autumn [Nielson].”

What has been a highlight of the season for you?

“The highlight is probably playing doubles. I feel like, for me, just getting the opportunity to play more doubles since I played a lot of singles last year. So definitely playing doubles and building that chemistry with my partner.”

If you could have lunch with anybody in the world, would it be?

“Probably with my grandma, my mom’s mom. She lives in Venezuela. I really would say both my grandparents. They live in Venezuela and I really miss them.”

Are they your biggest role model, do you think?

“Definitely one of them. I’m not very close with them, because they’re not here. But they basically raised me when I was younger and I feel like, you know, they’re like a second mom to me, even if they live a thousand miles away.”

Who are your other role models?

“My main role models are definitely my mom and my dad. They both have different perspectives, but each perspective teaches me something, you know? In those two perspectives I can see it in both ways, and unite the two together.”