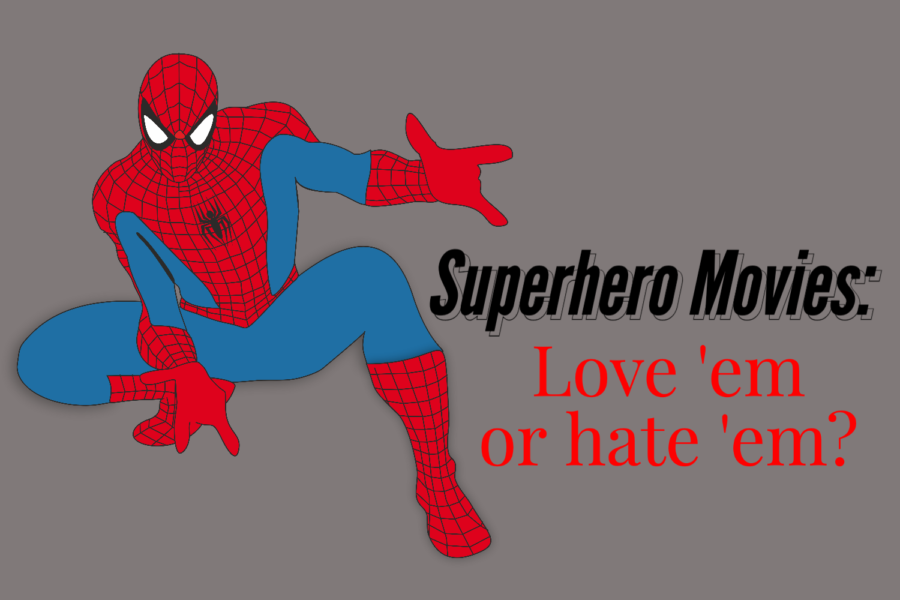 Staff writers Reece Cavallo and Jacob Valcarce face off on whether superhero movies are overrated or as good as it gets.

What if I told you the new Spider-Man movie was overrated? From my experience, you would probably try to throat punch me. I am confident that there is no quicker way to personally offend your average freshman boy than to tell him that you didn’t like the newest Marvel movie. And it’s not just freshmen or dudes; everyone seems to be a die-hard superhero fan. The adoration of these movies is so bizarre to me because, as far as film genres go, superhero movies tend to be sub-par.

Iron Man saves the world by destroying Thanos but dies as a result. Sure, it’s noble. But it’s also predictable and boring.”

The main issue with these films is the lack of boundaries. Unlike regular action films, the protagonist in superhero movies can withstand normally fatal physical blows and perform crazy feats of strength. This would be cool and all if there was an understood limit to their powers, but the problem is that there isn’t. Spider-Man survives being hit by a train. Black Panther takes falls of hundreds of feet and gets up like it’s nothing. Captain America crashes an aircraft into the Arctic, is frozen for 70 years, and then wakes up fine. When a hero can survive things like these, it really cheapens the action scenes. So our hero is getting punched and thrown around, what does it matter? He’s already been hit by a train; he’s going to be okay. In the end, if a hero does get seriously injured, it’s from an arbitrary event. The Tobey Maguire Spider-Man gets stabbed in both Spider-Man 3 and No Way Home, but is only really affected by it in the later movie. The degree to which a hero is injured depends on its value to the plot. It’s unrealistic.

Speaking of unrealistic, the addition of the Multiverse in these latest superhero movies has made these films even more ridiculous than ever. It must be nice to be a Marvel screenwriter. Need a villain? Easy, they’ll just appear from another universe to battle some assortment of heroes from whichever universe is most convenient. With the introduction of this incomprehensible system of universes, writers can make pretty much anything happen without giving a clear reason. The audience just accepts that the workings of the Multiverse are just too complicated to understand. Admittedly, this sounds like a good way to cause interesting situations, but this comes at the cost of coherency, which in turn alienates the audience from the film. There has to be some understood ground rules in a movie. The Multiverse brings to mind the kids that would make a cross with their fingers and play “God” in a game of Rock, Paper, Scissors. It’s convenient, but it really screws up the game.

Lastly, most movies are guilty of predictability, but none are so much so as superhero movies. Granted, the confusion of the Multiverse with all its new superhero interactions has seemed to change this in recent movies, but even this is only a superficial distinction. In almost every movie, the hero is pitted against a sinisterly-intentioned villain, with whom the hero spars a couple times before the final showdown. In the final battle, the hero defeats the villain to defend the common good but sacrifices something personal to them. Captain America saves New York from the crashing bomber plane but gives up a life with Peggy. Spider-Man closes the inter-dimensional portal bringing infinite villains into his universe but is forgotten by everyone. Iron Man saves the world by destroying Thanos but dies as a result. Sure, it’s noble. But it’s also predictable and boring.

Despite these flaws, I know my friends will still go berserk when the next big name Marvel movie comes out. In fact, I’ll probably go see it with them, just to stay current. I know, however, that I will end up aggressively explaining the reasons that the movie is ridiculous, leaving everyone, including myself, wishing that I just went to see a normal action movie instead.

The new Spider-Man movie is one of the best movies to come out of 2021. It has everything that a movie needs and more: character development, a love story and an impactful ending. It was the perfect latest addition to the Marvel Universe. In fact, there is nothing much better to watch than superhero movies.

First off, let’s focus on character development. Superhero movies do such a good job making sure fans know the backstories of characters and get invested in what happens to them. They also do a great job of showing how characters evolve. In the film Iron Man, Tony Stark is a greedy, rich man. But when he gets kidnapped, his life is changed forever. He takes his story a step further in Avengers: Endgame when he sacrifices himself to save the world from Thanos.

No superhero movie is complete without a love story intertwined. Everyone has their favorites – Batman, Spider-Man, the hulk. It makes us root for one character over another and adds an added dimension to their tough exteriors. One example is in the show Wandavision, Wanda creates an alternate reality with her lost love, Vision, whom she lost in a previous movie. At the end of the show, she has to accept that Vision is dead, but before that, she lives in different decades and sitcoms with him (in the alternate reality)  to try and relive her relationship with him. It shows how strong their bond was and viewers can almost feel her pain as she tries to live a life she can no longer truly experience.

Lastly, the endings in superhero movies cannot be beat. It is what everyone talks about for weeks after their releases. It’s why people rush to the movies so that no one spoils it for them before they see it themselves. And it’s why spoilers are instantly online – as soon as people see the endings, they want to talk about it with others. In Avengers: Infinity War, all of these heroes are put to the test. You need to see all of the movies to figure out all the characters’ stories. The movie ends with the antagonist, Thanos killing 50% of all life in the universe, including the heroes, and the protagonists losing the fight. This plot is unexpected and different from other superhero movies you might have seen. Every movie has an ending that affects the plot, so whether it’s the regular ending, or a credit scene, the endings are unbeatable.

Spider-Man has everything that a movie needs and more: character development, a love story and an impactful ending.”

Some might argue that all superhero movies have the same plot, but they do not all go the same way. For example, just as you start to predict what might happen in the Avengers film, they shock you. You simply cannot predict what will happen next. What is frustrating and kind of fun for fans of the franchise is that you  have to wait a whole year to see what’s coming. It’s more often than you might think.

Who knows what the next Marvel movie will do to affect their world, but we will have to wait. Whether it’s the character development, love stories, or endings, these movies aren’t going away because they are simply too good.  If you have never given superhero movies a chance, start with Iron Man. For those who have not watched one in awhile or lost interest years ago, the newest ones are a completely new type of superhero movie and they are more than worth your time.