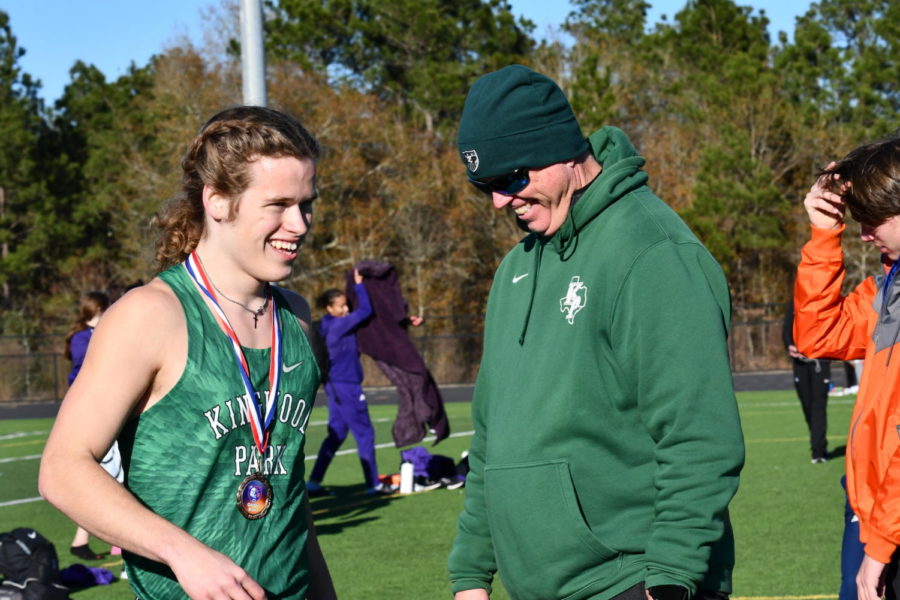 Solomon Karash celebrates with coach Chris Elliott at the end of the Grand Oaks Invitational early in the track season.

Being in cross country for all four years of high school, I must have heard “Welcome to the Jungle” 300 times by now. Coach Chris Elliott, a die hard ‘80s rock fan, has barely altered his playlist since I was a freshman. In spite of this, it would be hard to find an athlete who didn’t like the man.

Coach Elliott’s reluctance to change his playlist is just one of the many personality quirks that his runners recognize him for. He’s known for his pre-practice speeches in his west Texas drawl that often run long but always serve some kind of purpose. And when practice is over and it’s time to compete, Coach Elliott is famous for his excited cries of “Meet day!”

Coach Elliott has always been hard on the cross country team. There have been many practices when us runners have had to endure his disappointed lectures or frustrated scoldings. In the end, though, Coach Elliott was tough on us because he really cared about the team. When we were doing well, Coach seemed happier; and when we slacked off, he was definitely gloomier. He was invested in the team, and that’s what makes a great coach.

When I look back on my teenage years, I know I’ll always remember Coach Elliott. He and cross country were some of the few constants in my always-turbulent high school experience, and they provided me with some stability and purpose when I felt like everything I thought I knew was wrong. And although the cross country team never made it to Sstate during my career, it makes me glad to know that Coach Elliott will have the chance to make it there again with the next generation of runners. He deserves it.